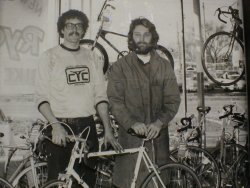 Rydjor Bike Shop opened its doors in July 1973, Dan Ulwelling and Pat Geraghty formed a partnership to capitalize on the "bicycle boom" of the early 1970s. European bicycles were becoming popular in the American market, replacing the balloon and middleweight U.S. made units that were common before that time. The bicycle market changed from mainly juvenile to more adults riding during this time.

Rydjor was totally undercapitalized with a $5000 loan secured by Dan and Pat's parents as the total business funding. Dan continued to work at both Rydjor and the Hormel Foods plant until 1977.

In the 1970's, BMX (bicycle motocross) became popular, first on the west coast.  Kids in Austin saw what was happening out west and started modifying 20" bikes to race around town.  Pat and Dan both were racing motorcycles at the time and, with the urging and help of local BMX riders, built a BMX track behind the shop.  Rydjor hosted what is believed to be the first BMX race in Minnesota in 1974.  The sport continued to grow, Rydjor sponsored a BMX team, and held outdoor races in the summers and winter indoor races at the Riverside Arena until the mid 1980’s.

The "bike boom" ended in the mid-1970s and Rydjor struggled to make ends meet. The decision to move from the original $50 a month east side location to the Sterling Shopping Center area in 1978 proved a forecast for improvement and growth. In 1980, Rydjor bought out a foreclosed shop in Albert Lea and opened a second Rydjor Bike Shop in the same location. The store in Austin moved two more times, and has been at its current location, an old SS Kresge department store, since 1984.  In 1986, Rydjor added the Trek (Waterloo, WI) Bicycle line, which proved to be a fortuitous decision.

The Bike Collection started out with customers occasionally bringing in old, good condition bikes that were traded for or purchased and set aside.  The early collection sat in storage until Dan got very involved with it in the 1990’s.  His knowledge of antique bikes grew, and with the dawn of the Internet age, was able to secure the bikes he wanted to fill out the collection.  The 85 bicycles on display represent the history of cycling, and the latest addition is a 2003 Waterford owned by the late comedian Robin Williams.

Pat had always wanted to finish his college - graduated from the University of Minnesota in 1990 and took a position as a Mechanical Engineer.  Dan continued to operate both stores until 1993 when the decision was made to consolidate back to one store. A total store remodel was completed and the single store business eclipsed that of both stores. Out of more than 6000 bicycle dealers in the country, Rydjor was selected as one of the top 100 dealers in 1999. 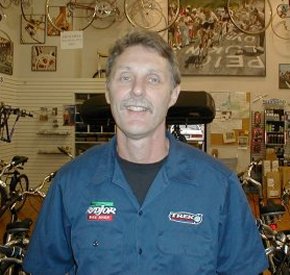 Rydjor Bike Shop lost one of its founding partners with the passing of Dan Ulwelling on January 8th, 2006.  Dan battled multiple myloma, a form of cancer, for 3 years the same way he lived his life - with grace and humility.

Dan was the sole operator of Rydjor Bike Shop since 1992, when Pat left Austin to pursue a career in Engineering. Dan's influence and taste can still be seen in the shop. He was an avid collector of classic, antique, and unique bikes. He is responsible for assembling Rydjor's collection of 84 bikes that hang from our walls and ceilings. Dan's knowledge of vintage bikes was amazing.

Dan was also an accomplished artist and several of his paintings hang from Rydjor's walls. In the above photo, you can see Dan's painting of fellow Minnesotan and 3-time Tour winner Greg LeMond attacking 5-time Tour winner Miguel Indurain on a climb of the Tour De France.

Dan's influence and values will always be a part of Rydjor Bike Shop. He is dearly missed by many.

It was a difficult time after Dan's passing, he was the heart and soul of Rydjor.  Pat decided the shop needed to stay open, helped out in between his work until 2014 when he was able to devote more time to the shop.   In the past few years, the shop has undergone improvements inside and out, the Trek line has become a bigger and better part of Rydjor, and the vintage bicycle collection is as beautiful as ever to see.  If you haven't stopped in lately, please do, you'll enjoy it!  We think it's the coolest bike shop anywhere -

Pat Geraghty has been with Rydjor Bike Shop since day one, back in '73. Between heated foosball battles at Smitty's Tavern, Pat and Dan built the store from the ground up. Rydjor continued to grow and relocated several times in the early days to accommodate the business. With Dan running Rydjor smoothly in downtown Austin, Pat moved to Minneapolis in the early 90's to pursue a career in engineering.

Pat retired from his sales/engineering work in 2014 and is today very involved in Rydjor. Janet and Pat got a chance to be on a bike ride with Dan and Pat's cycling hero - Greg LeMond, 3 time Tour de France champion, the only American to hold this honor.